Herbs and other Medicaments 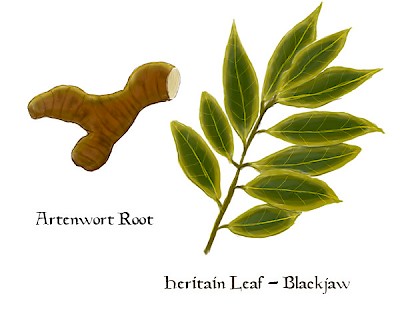 True healers, such as Mab-Tok, are extremely rare and the chances are that the huge majority of people will never have the luck of meeting one. But even for healers, their true power lies not in any talent, but in their huge knowledge of herbs and other plants that can be used in tonics, poultices and Mab-Tok's infamous purges.

There are a huge variety of plants used in such medicaments and much debate as to the efficacy of some, but here is a limited list.

This is a binding made of a concoction of herbs used to draw infection and poisons from a wound.  The primary leaf used is the Hogain.

This heavy rooted plant is named for it's popularity with pigs who will dig it up and chew on the thick tubers.  The large leathery leaves are used for the common bitterwyr poultice not just for their strength but because of their antiseptic qualities.

Used as a mild soporific,  the small, thin leaves of this plant can be dried and then thrown on a fire, but are more often used with mint in boiling water to add healing vapours to a room.  Sometimes also used in baths for those that have such luxury.  The root it used in cooking to add sweetness to food.

A thorny plant the berries from which is used for bladder problems. Also, apparently, as a love charm.

Generally thought to be a good preventative medicine and many healers often add it to their tonics as a matter of course.

Used as an antidote to natural poisons, it is seen as dangerous as it can have terrible side effects, the most noticeable one is extreme diarrhea and dehydration, especially in humans.

This innocent sounding herb that likes a wet environment, is a small leafed plant with woody stems.  It is used both in bindings for wounds but also to induce vomiting.  Popular with healers in purges, it is very unpopular with any who have to take it!  However, the woody stems are used for cleaning teeth.

This has numbing effects and is used in treating wounds to reduce local pain.  It is a nettle like plant and some dragons are allergic to it and it will produce a rash.

Grows as a weed in meadows where it likes lots of light (never find it in woods).  The fleshy leaves are used to help fight infection.

Very poisonous to humans and many other animals, the dragons use it as a mild sedative. It is also thought to drive away evil spirits by some.  It smells terrible.

This common form of pain relief is a thick, tough leaf from a tree called the Heritain.  Chewing it can produce a little relief from muscle ache and even headaches, though nothing dramatic. Continued use over a long period of time will tend to stain the tongue , hence the name.  Dried leaves, though less effective than fresh, are the most commonly found as they are very cheap and popular with workers.

The issue of Healing in Dirt is very important to the story, not just because it keeps a couple of characters alive, but because it relates to ancient history which will become apparent later in the books.

Although I am, by nature, a great believer in modern medicine, and definitely not inspired by the pseudo-science of alternative medicine, I have a passing interest in the origins of good science that is to be found in man's early experiments with herbs, roots and flowers.

Some of these were, of course, more wishful thinking than any practical use, but others have lead to our modern science with naturally occurring substances like  salicylic acid, the central ingredient in Asprin, being known for a couple of thousand years at least.

So, in Dirt, I rather like the idea that healers such as Mab-Tok are more reliant on their use of herb lore than on anything "magical."   It makes healing more interesting, harder work and fallible!