The Isle of Hope

The most beautiful island on Dirt 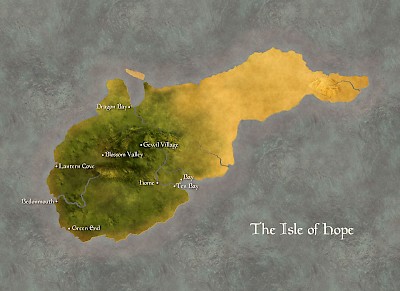 At nearly one hundred leagues in length, Hope is a large, hospitable island that benefits from its southerly location and the warm currents from the Missing Sea.

The island is divided into two distinct areas.  The larger, westerly region is a fertile mix of gentle heathland, rivers, rolling hills and the larger, white rocky peaks of the Gewil Hills. The thinner eastern end of the island, an area known as Ceosei, is a flat, arid rocky desert, unsuitable for habitation, though dramatic in its own right.

The island is predominantly white limestone and granite and the earth has a sandy colour though it is rich and fertile.

The large Gewil hills are a source of copper and other basic minerals; there is no coal and iron on the island. The three main rivers all have their sources in the hills.  The Gewil Hills are heavily forested.

The Southern Hills are a small range of low hills that are sparsely wooded and have been used for vineyards at various times over history.

The currents around the island make travel to and from the island difficult, but the large and well sheltered Dragon Bay on the north coast makes for good anchorage on its western shore; much of the rest of the bay is too shallow for shipping.

It has only been populated twice in History.  The first settlement dates to just before the rise of the Haften Empire and though no remnants of that nation now exist, tales tell of a large, sea-fairing nation called the Annecs.  Many of the tales involving men and women who lived hundreds of years are seen as myth.

The Haftens never ventured to the island and it is not known when the early civilisation died out.

It was later populated again by a small community of dragons and then by a community of humans who had fled Bind.

Quite why the island has spent so much of its history neglected by humans, in particular, is unknown, but many speculate that the difficult and treacherous seas around Cape Hope and the remoteness from the busier trade lanes of the northern Yonder Sea have left it little more than a distant, but impractical paradise.  A lack of iron may have also contributed to the lack of popularity.

Those that have populated it have basked in a constant summer and the warm currents that caress the shores.  It is seen as a place of romance and beauty, but for most on Dirt, it has always been a remote dream.