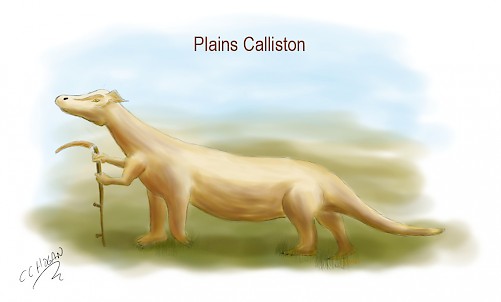 In tale and song, Callistons have been the friendly farmer, or the gentle beast sheltering the frightened human child, but in truth this massive beast is probably the least known and understood of the three intelligent people of Dirt.

The origin of the Calliston, called the Draigfan in the older languages, is much debated.  Some believe that it is a relative of the dragon since it is also a hexapod and there are similarities in the bone structure, Others believe it is a completely separate family and point to the hair that covers the calliston as evidence; dragons are completely hairless.

Whatever the truth, that the Calliston is a highly intelligent, cultured people is without doubt.

Although Callistons do not fly, they have the same lack of interest in territory as dragons and prefer to live in in small, tribal villages of no more than twenty families with no overall political structure.  They have always had only limited contact with other peoples, human especially, through stories from ancient times tell of good relations and trade.

There are two main groupings of Calliston; the large heathland Calliston who farm and the smaller, lesser known forest Calliston.  The forest Calliston have only ever been found in the far north of Bind, mostly living in the  Weld Ormete Nord, the  Great North Forest.  They are about twice the size of a bear, hunt with spears and build houses from trees.

Callistons have four legs and two arms.  The legs are relatively short and very powerful and they can trot at a considerable speed for many hours at a time.  They have shorter necks than dragons and their heads are wide with a relatively short snout.  Their arms are jointed just in front of their front legs in a similar way to dragons where their arms are just ahead of their wing joints.  These similarities have enforced the argument of a familial tie.

It is difficult to appreciate just how large the plains calliston is, the larger of the two species, but the image above is, perhaps misleading, since they create tools commensurate with their size. As a guide, if a human male was in that picture, his head would be beneath the left arm.

The Haften empire created dummerholes.  These tragic beasts were callistons captured at an early age who have a hot poker put into their brain.  The result is a servile creature with no more obvious intelligence than a horse, though there is some evidence that they are far more intelligent, but have lost their ability to communicate.  The mutilated creatures are then trained either as work animals to be used for transport or mine work, or enraged to be used as fighters.

Dummerholes from Plains Calliston, grew to enormous size, though it is not clear why.  They were often thicker set, with heavier legs, though not necessarily much bigger than normal.  They tended to have wider backs than their natural kin and were much longer in the body.  A dummerhole used as a pack animal could carry twenty humans, though this would be uncomfortable for both the Calliston and the Humans.  Eight or ten humans would be the norm.  They were covered with thick hides with long, knotted straps so that passengers could climb up.  Dummerhole arms tended not to be much bigger than those of the calliston and looked undersized as a consequence.

Dummerholes have not been seen in any number for several millennia.

Open if you have read "The Fight For Dirt"

Callistons were affected by the same disease that affected dragons and it is believed there are no calliston left on either Bind or the Prelates.  They had already been in decline for many centuries and there were only a couple of villages known to still exist; Belin Tekkinmod sent men to wipe out one of these in revenge for losing his two dummerholes.

The last known calliston was one of those dummerholes who had regained a small amount of speech and was living on the borderlands of the Eastern Plains in a quiet valley in Southern Bind.

I am sorry that I have not included Callistons more in the main stories as these are a truly wondrous creature.  Of similar size to red dragons, their much thicker set bodies make them seem vast.

However, these are not the stiff legged creature of the old cinema brontosaurus.  For my inspiration, I have mixed up a tiger and a Komodo Dragon, giving me a creature than walks softly and easily and is supple and fast.  Thankfully, they are also incredibly peaceful!

The reason I did not spend more time with them is that  their vast size makes them awkward to deal with in any great detail within the main story.  I hope I have made up for it a little in Yona and the Beast.

Very fond of the calliston, I am.